Soils and plant fires naturally produce ammonia, but people contribute most to the atmosphere via agricultural operations such as fertilizer usage and animal grazing. Ammonia, when present in high concentrations in an environment, may cause soils to become acidic and impede plant development. As an air contaminant, it may cause heart and lung disease.

The period of study

According to new NASA research data, ammonia concentrations in the air grew significantly between 2008-2018 across West Africa and the Lake Victoria area. In addition to biomass burning, agricultural growth and intensification were associated with the surge.

The researchers utilized satellite data from 2008 to 2018 to track variations in ammonia vertical column densities, a direct measurement of gas distribution and concentration throughout the continent and their potential sources.

Africa’s ammonia emissions are less investigated than those in the US, EU, and China. NASA claims this is the first study to establish long-term changes in atmospheric ammonia concentrations in Africa.

The peak period of emission

Most of the rise in ammonia vertical column densities in West Africa occurred in February and March, when widespread farmland fires occurred. The research indicated that the majority of the rise happened before planting season.

During February and March, ammonia levels rose 6% yearly across Nigeria. During the same period, the amount of carbon monoxide in the atmosphere increased, according to satellite data from 2008-2018.

The region with a decline in Ammonia emission

The 30,000 square-kilometre Sudd wetland fed by the Nile River demonstrated a 1.5 per cent yearly decline in ammonia during the study period.

The research identified West Africa as an ammonia hotspot. Africa’s agricultural activities will increase and it is necessary to feed a rising population so that ammonia concentrations will rise.

The most significant mean annual amounts of atmospheric ammonia were discovered in North Equatorial Africa, notably West Africa, throughout the decade 2008–2018. 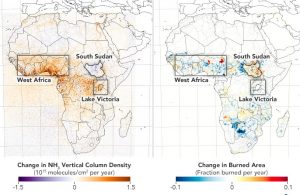 Governments in several African nations are encouraging the use of fertilizer to enhance food production. In Africa, it is usual to burn both live and dead trees and plants.

The research concluded that higher agricultural inputs might be related to elevated ammonia concentrations in the Nile basin.

The Elephant extinction crisis in Africa

Anthropogenic changes behind increasing forest fires in the United States

We will be happy to hear your thoughts